I’m Nobody and You Should Vote for Me

It’s election time in the USA again, and this year you should vote for Nobody. I’m Nobody, and I’m not running this year – but you should wish I was. 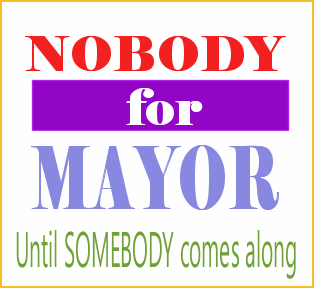 I am qualified to run for president, prime minister, governor, congress, parliament, your mayor – you name the office, I’m qualified.

Really? Do you really want any of those folks? Do you? Put me on the ballot and you might get somebody you can feel good about voting for.

Now, if Patty, Maggie, and Clifton don’t excite you, you have a choice. You can vote for Nobody – that’s me. And if Nobody wins, the parties must come up with new candidates and you get to vote all over again for SOMEBODY you really want. If Nobody (that’s me!) wins again, then the political parties better produce candidates you really feel good about because Nobody will win until Somebody wins.

And when somebody wins it will be somebody you really want, not someone who was elected because they were the lesser of all the available evils and you didn’t have a real choice.

You should make sure that I am on the ballot everywhere, for every office, and for every election.

I am your candidate of choice when you don’t really have a choice.

Only you can put Nobody on the ballot. You can demand that Nobody is on the ballot everywhere, every election, every time. If you don’t, you may never get Somebody you really want to vote for.

I’m Nobody. Don’t you think I should be on the ballot everywhere?

But I cannot do it by myself. I’m just Nobody. Only you can make sure that I,  Nobody, is on all your ballots in every election, every time. And because it’s your vote, I know you want it to count.  And the only way that is ever going to happen is if Nobody is on the ballot in every election.

Make sure I’m on your ballot and vote for me – Nobody – until Somebody you really want comes along.

I’m Nobody and you may never get somebody to vote for until you vote for me.