Easily Keep Your Desktop Icons In Order With DesktopOK

Just about every week, we receive an email or two from disgruntled Windows 10 users who are upset because a Windows update has changed the order of their desktop icons… that, in some cases, took a lot of time to get sorted out.

We don’t recommend Stardock Fences or any of those other desktop enhancement utilities/programs because they’re always running in the background chowing down on  your computer resources. Of course, we’re penny pinchers when it comes to conserving our PCs’ resources. But we realize that to some people aesthetics come first.

So, if you have spent a lot of time organizing your desktop icons only to have them re-arranged by a Windows update — or a Windows gaff — we have a freeware program we think you’ll like.

We like it because all it does is save your current desktop layout as a file. You can restore your current layout from that file, if and when you need to. The program does not have to run in the background… or even start up with Windows. And guess what? You don’t even have to install it. You just unzip it, and run it.

We do recommend after you unzip it that you create a shortcut for it on your start menu. That way, if you ever need to restore your desktop icons in the exact order you like them, just open the program and restore from your saved backup file. It’s that easy. It’s called DesktopOK. It has a lot of other great features too.

Here are some words from the developer, some screen shots and links for more info and, of course links to the the downloads.

Save and restore the positions of the Windows Desktop Icons.

DesktopOK is a small but effective solution for user that have to change the screen resolution often. t is also good for windows users who often have to work with a projector on the notebook eg laptop or tablet-pc.

After you change the screen resolution you can find an icon chaos on the windows desktop, as if a bomb had hit it.

DesktopOK has also other helpful functions, you can find this, in the Main-Menu, Tools.

Save and restore the positions of icons. DesktopOK is a small but effective solution for users that have to change the screen resolution often. DesktopOK does not have to be installed and can be executed easily from the desktop. 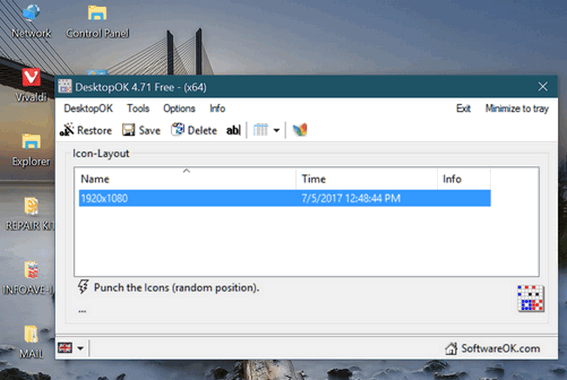 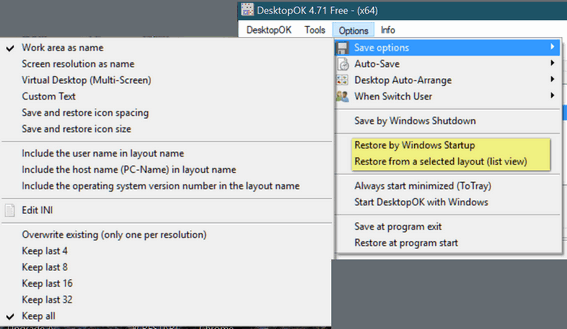 Interested?  You can read more about DesktopOK by visiting this page.