While many of you are still waiting for Windows 10 Version 1809 (October 2018 Update), Microsoft is busy working on the next version of Windows 10 – Version 1903 – tentatively scheduled for release in April 2019.

We’re currently testing the “Insider version” of Windows 10, and this change showed up in Settings > Update & Security:

Clicking on “Advanced options” brings up the “Pause updates” dialog, with a drop down menu allowing users to delay Windows updates for “7 days” (according to Microsoft). 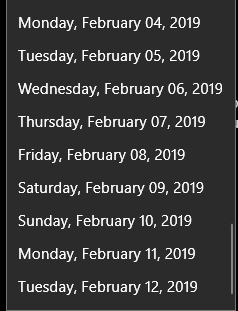 Anyway, it looks like Microsoft is going to have a setting so that Windows 10 Home users can easily delay updates for at least 7 days.  But keep in mind that these screenshots are from an insider build of Windows 10 , which is basically a beta version. From experience, we know that features in insider builds come and go like the witches in “The Wizard of Oz”.

It should be noted, that as of now, after you delay updates and then click “Resume” updates, Windows will immediately check for updates and download and install any updates… and cannot be paused or stopped. We’re hoping Microsoft modifies this.